In June 2020, WasteAid embarked upon an innovative and expansive programme to support circular economy solutions to the waste crisis in three locations; Ho Chi Minh in Vietnam, Guwahati in India and Johannesburg, South Africa. Supported by Huhtamaki, this programme finally drew to a close in autumn 2022. 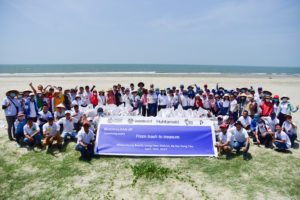 In just over 2 years there were some fantastic results achieved – WasteAid’s Circular Economy Networks had been developed in 3 locations. The networks attracted over 1,000 members with more than that number attending the online webinars and trainings that were developed (even the pandemic didn’t stop the progress). The partnership supported 36 entrepreneurs through tailored business training and mentoring and 6 entrepreneurs were awarded with 10,000 Euros each of seed funding. Those supported included a plastics recycling enterprise in India, an organics and composting enterprise in South Africa and an app developer in Vietnam aiming to make waste collection more accessible and efficient.

The partnership between Huhtamaki and WasteAid has clearly moved the needle in terms of both local perceptions of waste and direct action to reduce waste pollution. By orienting the programme towards supporting and strengthening existing systems and local innovators, the partnership has ensured a sustainable legacy. A relatively young international non-profit focused on tackling the global waste crisis through support to and promotion of solid waste management systems and circular economy innovations, the financial investment from Huhtamaki was a game changer for WasteAid. The organisation cut its teeth delivering community-based interventions in Sub Saharan Africa rooted in the premise that livelihoods and environments can be improved through training and skills in waste related activities. However, with Huhtamaki’s ambition and vision for the partnership, WasteAid was able to expand its horizons in terms of scale and depth of intervention. 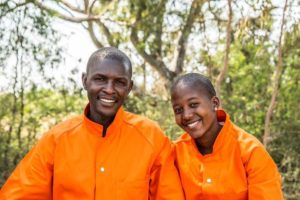 Image: BoombaDotMobi – A winner of the Zero Cities Waste Challenge in South Africa.

The purpose of the partnership was to bring together diverse stakeholders in 3 localities to build and share knowledge in waste and recycling activities, to facilitate discussions and collaboration between those at different points in the waste value chain and to practically support and finance local entrepreneurs and innovators, ‘wastepreneurs’. The partnership recognized that where there is a lack of municipal waste systems, the private sector and even more the informal sector fill that gap. The networks were rooted in community responses. The innovators and entrepreneurs that were supported also had a social value element, for example offering employment potential to those in a lower socio-economic bracket or providing finance to young innovators from deprived areas who would not be able to access traditional finance.

Above all the networks attracted significant diversity, of course there were those directly linked to the waste value chain in some way from local government, enterprise or trade organisations, but equally there were leading academics, multinational corporations, local businesses, Chambers of Commerce and international governments who became stakeholders in the networks, not to mention nearly 200 Huhtamaki employees who engaged in activities to support the partnership in the different locations.

A key element to the programme was flexibility, ideas conceived in London or Helsinki had the space to be tried locally to ensure they were relevant, needed and impactful. Some elements of the programme plan were deliberately light on detail at the outset to ensure that the local membership could themselves identify their greatest needs and the network could grow organically. This meant that the partnership could focus on tackling important local issues identified by those closest to them, for example how to maximise benefit from End Producer Responsibility legislation in South Africa or strategies to grow domestic recyclables in Vietnam given the high quantity that are imported.

And yet perhaps the biggest impact of all has been what has happened outside of the confines of that initial programme. The approach taken by Huhtamaki and WasteAid has captured the imagination of other funders keen to implement a meaningful sustainability strategy and the initial circular economy network model has been adapted and exported by WasteAid to two further countries, Gambia and Egypt and extended further in South Africa. The success of this approach and the common thread running through these networks is that they are rooted in the local context, that whilst funded by Huhtamaki and facilitated by WasteAid, they are owned by their members. The second critical element is that there are seriously bright ideas borne out of local challenges and that home grown solutions to the waste crisis are often the most sustainable and should be supported. As access to finance remains a significant challenge to many working with waste in lower and middle income countries, the approach developed by the partnership fills a critical role in supporting youth entrepreneurship, skills and training. 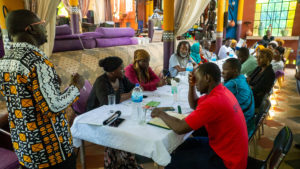 The original programme focused very much on the community level and how the grassroots could drive the circular economy, but this is not entirely the case in all countries. In Gambia, for example, it was recognized that it was at local authority, government agency and Ministerial level where the most traction would be had and so the approach to networking was adapted. Additionally, with other funders signing up to this approach, WasteAid has added a further mentoring element to the programme joining experts from a chartered institution in the UK to work with Gambian counterparts to find solutions to waste related issues.

Although the initial partnership funded some tremendously exciting initiatives, another question arose as to how those who were not yet at that relatively advanced level could be helped. The WasteAid team were keen to focus on the lower rungs of the waste value chain where holistic life skills training, business skills training and smaller injections of finance would have a massive impact. Huhtamaki has accompanied WasteAid on this journey and is now financing an entrepreneur’s fund focused on those on the first rung of the waste value chain. This approach is proving incredibly successful in Johannesburg. In Egypt a more geographically targeted approach was taken and the network was launched in Aswan, working again with local structures and the existing value chain. The Egyptian model mirrors the initial programme, however, has a focus on flexible plastics only as opposed to multiple waste streams.

Overall, the core elements of the Circular Economy Network approach have proven a particularly impactful mix and WasteAid continues to evolve its programme design as we learn more. However, the multiplier effect is clear to see, that initial ambitious vision developed by Huhtamaki and WasteAid continues to be developed and delivered throughout Africa, impacting thousands of individuals, hundreds of communities and dozens of circular economy enterprises. 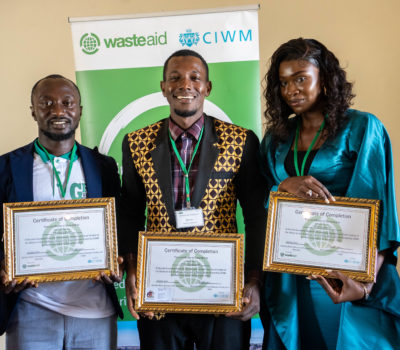 Winner announced for WasteAid’s Waste to Use Challenge in The Gambia.

WasteAid’s Waste to Use Challenge was part of an initiative funded by the Chartered Institution of Wastes Management (CIWM) to fast-track circular economy initiatives... 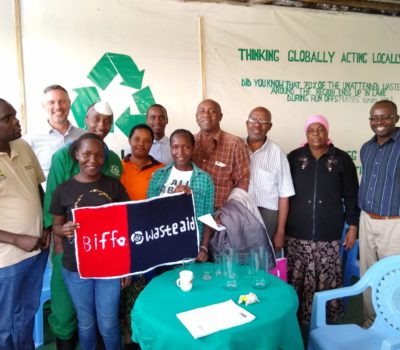 A spotlight on Biffa and WasteAid’s Proud Partnership in Cameroon.

Written by Ceris Turner-Bailes, Chief Executive WasteAid. In November, I had the privilege of travelling to Douala, Cameroon to follow up on WasteAid’s projects... 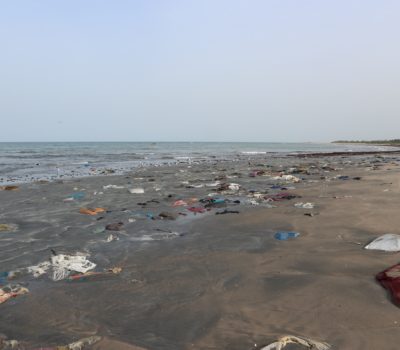 WasteAid is proud to announce new funding from the Norwegian Retailers’ Environment Fund.

WasteAid is pleased to announce they have been successful in securing funding from Norway’s largest private environmental fund, The Norwegian Retailers’ Environment Fund, which... 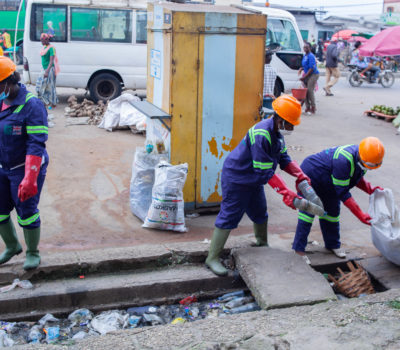 WasteAid improves livelihoods and reduces plastic pollution in Douala, Cameroon thanks to the generosity of the British public and match funding by the UK government.

PRESS RELEASE 16 December 2022   WasteAid’s recent work in Cameroon has led to people in need of support securing employment and improving their...